With its November publication of The Rain Folows the Forest–Hahai no ka ua i ka ululÄ`au, the Department of Land and Natural ResourcesÂ announced a ten year plan to replenish Hawaii’s source of water whileÂ expanding natural resource jobs. For more information, here is the link.Â We’ll continue to track this for readers.

If you would like to find out more about the forests and forest industries of Hawai’i, here are a few sites and places to research, visit and discover.

For Students and Further Research 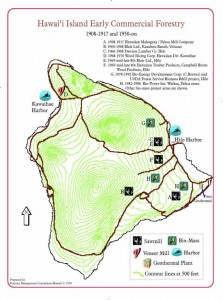 Commercial Forestry Activities in Hawai’i
Pre-Contact to the Present

Commercial forestry activities have been conducted in Hawaiâ€˜i since the arrival of early immigrants from Polynesia and other parts of the Pacific. These early settlers brought tree species from their homelands that were planted and used, along with indigenous trees, for the various activities of the society at that time.

Uses included, but were not limited to, home construction, religion, recreation, warfare, agriculture and fishing. It has been reported that more than 200 years ago large areas of land cover â€“ conservatively estimated to be near 25 percent of the land area â€“ had already been altered due to long termÂ human impact.

Commercial forestry activities have played a small, generally unrecognized, but important and interesting role in the economic development of Hawai’i.

Today, these commercial forestry activities are positioned to play a larger role in the diversification of Hawaiiâ€™s economy as they mature in the 21st century.